This is a Covid safe event. Please view our COVIDSafe page here for more info.

The key responsibilities of the LOC are to provide advice to the VFA regarding: Planning and coordinating the on-ground event logistics, activities, opportunities for attendees etc. including strong attraction for grass roots recreational fishers. Preparing delegate materials, marketing, keynote speaker requirements etc Discuss potential conference themes and speakers to be presented to the International Scientific Board to consider.

Developing a prospectus and securing sponsorship for the Conference from fisheries agencies, tackle companies, industry etc. and then deliver the value to investors. Developing and delivering appropriate, targeted and quality fisheries activities for the conference including guided fishing trip options, experiences and socials events. Cameron is the conference manager for WRFC10 Anthony is passionate about improving recreational fishing and has led many successful projects including shellfish reef restoration, enhancement of Australian bass, estuary perch and land-locked chinook salmon fisheries, Murray cod fishery regulations, the ‘Care for cod’ education programs and, phasing out of opera house nets. In the last few years, Anthony has led the design and construction of a new $7 million dollar native fish hatchery in northern Victoria.

Anthony is a keen recreational fisher who loves nothing better than throwing lures and chasing fish in wild rivers and estuaries. Director of the Futurefish Foundation
David Kramer is a Director of the Futurefish Foundation and runs two of Australia’s biggest fishing tackle retail stores. He is Chairman of Tackle World Australia and hosts his own Television and Radio program in Melbourne Victoria. David also provides advice to the Victorian Government on recreational fishing matters and serves on several Victorian Fisheries Authority committees and boards. Executive Officer of the Victorian Recreational Fishing Peak Body (VRFish)
Ben has over a decade of advocacy in recreational fishing and life-long passion for fish and all things aquatic.

A keen lure tournament competitor both nationally and overseas, Ben has several titles to his name including taking out the Murray Cod Nationals. 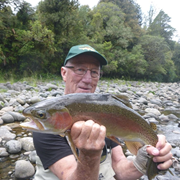 President of Australian Trout Foundation
Terry was destined to become a trout fisher as he was born in Bright on the banks of the Ovens River (a long time ago). His grandpa was a keen trout angler and started teaching Terry from the age of 4. From then on, Terry was "hooked" on trout and has a deep affection for the high country and its sparkling mountain streams. Terry's passion for the valuable wild trout fishery and the health of our mountain streams led him to join the ATF some years ago and 6 years ago he was elected president.
The ATF took heed of the advice offered at the first "Talk Wild Trout Conference" in 2015, being: "Take Care of the Fish, and the Fishing will Take Care of itself". Very wise advice. Since then, the ATF and its army of volunteer members and supporters, has been working together with the VFA, Catchment Management Authorities, DELWP, ARI, Landcare Groups, and thousands of volunteer anglers to restore the health of our waterways by initiating and completing in-stream and riparian habitat restoration projects. Senior Fisheries Manager at the Victorian Fisheries Authority
Taylor Hunt is the Manager of Freshwater Fisheries for the Victorian Fisheries Authority. Taylor is responsible for the sustainable use of Victoria’s inland fisheries resources and to improve recreational fishing outcomes. Taylor has over 15 years’ experience in fisheries management and science, working closely with fishing stakeholders to achieve great outcomes. Taylor has a Ph.D. in fisheries management and science, focused on the evaluation and improvement of fish stocking. He has authored over 50 publications, including 14 peer-reviewed journal articles, largely focused on recreational fisheries.

We acknowledge the Traditional Custodians of country throughout Australia and their connections to land, sea and community.
We pay our respect to their elders past and present and extend that respect to all Aboriginal and Torres Strait Islander peoples today.

Thanks for visiting us and your interest in WRFC10!

Here are some other key dates to take note of: